Why would anyone want to ride a crowded bus?TõnuMay 26, 2008

Comments (16)
Since the web2.0 hype was born and since Apple was saved by Steve, developers have started to acknowledge the presence of design. Web is full of nice user interfaces in front of thousands of useful apps. The widget manufacturer with the most well designed toys is the the cream of the crop on the consumer market. Design matters, it seems. Developers are slowly understanding, that design is the other part of their everyday work. "Okay, let it be," a developer thinks... and works on to become an even better backend master. 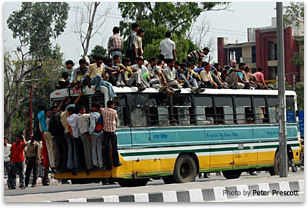 Appeal of the backend

A lot has been talked about the importance of design and usability these days. Engineers have started to accept it and don't consider them a mere luxury anymore. But that's about it. Backend is still the core of everything and UI plays the secondary role. There's a common myth, that the web interface development is a small, easy and beginners-only-part of the long path of becoming a master engineer. Begin as a html coder, then do some little javascript tricks and then you are ready to step into the Real World — to start baking the backend cakes.

Such mentality inevitably pays a high interest as "all the good girls" utilize their skills on the backend side of the two-sided world. UI is produced by those, who aren't worthy enough to do the real work.

Or maybe there's this other reason too for such one-sided reality — isn't it easier to drive a path so driven in, that you don't have to worry about anything? Also, being a good user interface engineer requires two kind of qualities — being good at programming and having a good understanding of usability. It's easier to stick to one quality, isn't it? That does'nt mean that UI guys are "better" in any way. It's just that people tend to be comfortable and unwilling to take risky roads.

The tide is turning

As said before — it has changed a lot for the better, but it's still so much harder to find excellent web interface developers for your team than it is to pick between all those brilliant backend masters. In Estonia, where we "conduct our business", the situation seems to be especially out of balance. Universities are producing mostly java guys and leave no cannon fodder for the web technologies as a whole, not to mention the UI engineering.

On the global scale, there's nothing to trumpet about either. As there's just no room to wait for the public education machine and general awareness to comply with the market need, for example Yahoo has taken some "grassroot steps". Firstly, they have launched the YUI Theater, which fills the gap by organizing lectures on UI topics and feeding them to the community. Secondly, there's a training program called Juku to educate the UI engineers in-house at Yahoo. Would like to see more of such activity.

So — hey you young developer! There's already enough javas sitting in their cubicles. Find yourself a less crowded bus to drive.